EVERYBODY is screaming for it…. but do we know why?

I love Google. And I hate to say it, but I practically LIVE within my Gmail. I am a completely dedicated and devoted Google-related user (as anyone who reads my blog doubtlessly knows) and will never hesitate to try out something new. Admittedly, Google are the kings of hype. If my memory serves me well, in order to get Gmail in the first place, you had to be invited by one of the “honored” early adopters. Well, the hype is again in the air, with the onslaught of the new Inbox.

So here’s the deal: beginning in the summer, Google started rolling out the new Inbox, which is supposed to organize your gmail in a way that will make it more convenient to stay on top of things. However the catch is, you need to be invited in order to get it. I’m not sure why they are doing it this way, aside from it being a marketing gimmick that makes you WANT what you can’t have (by “can’t have”, I mean that you can’t just download it whenever you want).

Embarrassingly enough, the technique worked. I fell for it (finding myself desperately BEGGING anyone I knew in my Google milieu, to share it with me, practically willing to give up my first-born grandchild just to get my hands on it…. but not altogether sure WHY). Another colleague, (with whom I shared an invite today) wrote: “I was feeling like the five year old who was busy playing at the party and missed out on the birthday cake :)  I hope I find the icing on the cake worth the effort.. but at least I don’t feel so rejected anymore."

As if the frenzy inciting weren't working well enough, there was one day, about a week or so ago, when Google announced that anyone who wanted could write inbox@google.com during a small window of opportunity of one hour ("between 6 and 7 pm ET time") - sort of like a Black Friday on steroids.

I am not quite sure why the giants at Google feel they need to do this kind of promo stunt. I think they're pretty great without all the need to use artificial ploys to draw people in.....but what do I know? Anyhoo.....

A day or so after you finally get the much coveted “Inbox”, you get “invitations” (they are colored yellow - like the “golden invitations” reminiscent of “Charlie and the Chocolate Factory”..not sure if that was intentional, but I’ve seen others who had that association as well). I didn’t get my invitations immediately, and was a bit confused, since people are asking for them all over the place, and I thought I had misunderstood how to send out invitations, but they showed up after a while. The first time I got three invitations  to share, the next time (about 5 days later) I got five. Apparently, for now, they renew themselves weekly on Wednesdays or Thursdays (according to one of my go-to Google guys, Eli Dori).

When you get it, you will see a red circle with a + on it: 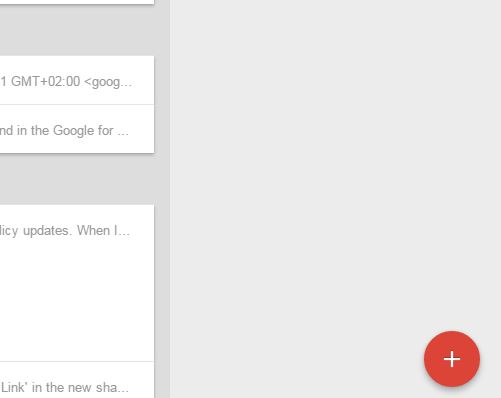 Clicking on the red circle opens more circles which show you a red circle for composing a new email, a golden one for invitations, and a blue one for reminders: 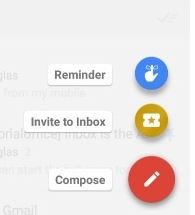 Above those you will see the three email addresses to whom you write most frequently.

You can use the new Inbox both on your phone as well as on your computer.

So what have I found so far?

I’m NOT in love with it.

Here are MY pros and cons SO far:

I am not giving up on Inbox - I have installed it on my phone, and am using both layouts for now. I’m trying to benefit from both “worlds” by using the features on it that I like, (it seems that there are lots of ways I can prevent myself from forgetting to deal with emails) but not giving up on the view I am used to, altogether, at least not yet.

In fact, now that I think of it, a while back, Google tried to change the way the Inbox looked by added a tabbed view. I did NOT like that change- and for my most used Gmail accounts (yes - I have numerous) I reverted back to the regular view. I’m guessing there were other people who didn’t buy into it either, which might be the reason for adopting a marketing gimmick that will make it more attractive to people (at least in the beginning, to convince them to try it out in hopes they will fall in love with it).

If nothing else, at least this “get it from a friend” deal is probably generating lots more email (I admit - I HAVE been feeling more popular lately) and getting people to communicate with each other asking for invites! (In case you are wondering, I’ve run out of “Invites”, at least for now.)

Have any of you tried the new Inbox yet? Here is a short clip about it. What is YOUR opinion on it? Please share your insights here!

BTW: Inbox works only on private accounts for now - not on accounts that are through GAfE (Google Apps for Education). I have no idea why nor whether this will change in the future.
Posted by Digitally Yours at 12:39 PM