Each year our school has “English Day”, for the 7th and 8th grades. Each grade is on a separate day, and on that day the English Staff prepare activities based around an English speaking country, to help our students learn more about that country in an experiential, exciting way. The classes are broken up into groups of 7-16 students. Each group is given a name that has to do with something British. A teacher is assigned to accompany each group. Each activity has a scoring rubric, and the class that scores the most points at the end of the day, wins!

I am not going to go into the details of the organization of the English Day, itself. I will just mention that it is a humongous job, which can only be achieved through teamwork and a very dedicated and determined person on the staff to coordinate it.

This year’s English Day was about the UK, and I wanted to teach my groups about Sherlock Holmes. I also wanted to incorporate technology in a meaningful way (of course!)

Here was the scene:
Fact: Sherlock Holmes interviewed people, looked for clues and then tried to understand what the motive was for the murder.

Situation: Jackie Frisbee was found dead in the back of the classroom. The students had to find out who did it!

In pairs or threes, they had to:

Then the pairs had to return to the scene of the crime (the classroom) and decide in their group - Who Dunnit?

The session started out by eliciting from the students what they know about Sherlock Holmes.


I then filled in any gaps with a presentation I made on Emaze (know it? You SHOULD! I’ll write another blog on it in the future)

Each pair was given an Information Collection Sheet, and the names and phone numbers of two people who work in the school, and agreed before hand to participate. They had to call the participant to find out where they were, and then go interview them. The participating “suspects” (who ranged in status from teachers, the guard at the gate,  to the principal and vice-principal) were given scripts with their fake names, the texted responses and were told that they could feel free to improvise, deciding how innocent or guilty they were going to look. They were also given two cards with barcodes that gave extra “secret” information!


Here was Carl’s text, for example:

Each of the pairs were supposed to interrogate two teachers, with overlap. For example, pair #1 went to interview Zmira and Rami. Pair #2 were sent to interview Rami and Moshe, and so on. That way they could gather and compare “evidence” (something that came in very handy especially when one of the teachers got the barcodes mixed up).
The barcodes had two different messages. The message for most of the time slots was something innocuous, the message for the time slot when THAT character was the guilty one, was more “sinister” Here is an example: The barcode on the left is the one that was shown ONLY during interrogations that took place with that character during lesson 4, the one on the right was for all the other lessons:

After the interrogation, the students had to send a photo with the “suspect” to my What’s App 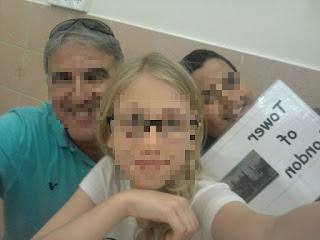 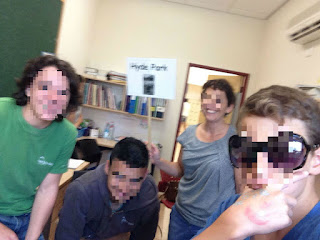 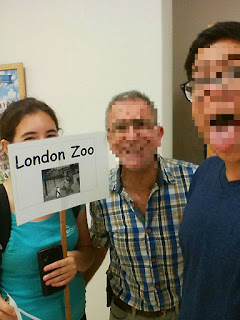 The kids had a GREAT time running around the school, using their smartphones, talking English and trying to figure out which one of his teachers is the guilty one! (One of the parents told me that her son called her up in the middle of the day - something which he NEVER does - to tell her how much FUN he was having!!!! :-)

I'll admit that it was quite a lot of work, planning it all out (especially if you are as much as a perfectionist as I am) but definitely worth it !
Have YOU ever used barcodes and Whats Apps to do a Treasure Hunt? If so, please share!!!

Digitally yours,
@dele
P.S. Special thanks to Judie Segal for the inspiration, and the insight that “You’ve GOTTA have a dead body to teach Sherlock Holmes!!!!” 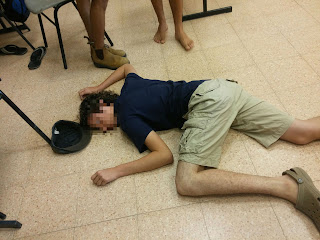 Posted by Digitally Yours at 9:16 AM