Messages to the Past: A Lesson for Teaching about the Holocaust

I believe the first time I was made aware of the book "I Never Saw Another Butterfly", when I was a teenager learning about the Holocaust. I loved the idea of preserving and perpetuating the artwork and writings of children who lived - and many who died - in the Holocaust. Specifically, at Terezin, where a very brave art teacher by the name of Friedl Dicker-Brandeis  dedicated and endangered her life to using art and literature to help the children with whom she worked, deal with the traumas they were living.

After becoming a teacher, myself, I bought a copy and use it from time to time, when appropriate, with my classes. This year, I wanted to do something a little different.  I wanted to build a virtual bridge between children of the past, and children of the present. A bridge that could link, even for a few minutes, children from "there" and "then" with kids from "here" and "now". I wanted to do it in a way that would enable creativity and messages of hope - spanning the decades, the cultures and the circumstances - to be able to touch my students of today, students who become desensitized to so much of life when viewed through screens.

Yesterday's lesson in my 11th grade class opened with a YouTube with music, photographs from the Holocaust, and drawings from the book - together with the words of the title poem:


I then asked the students if they had ever seen or heard of the book. (None of them had.)

I read a short explanation of where the artists were from, and how their teacher scrimped, saved, schemed and hid materials and their work, in order to provide not only the art lessons she was supposed to, but also a form of therapy for the children in her charge in the ghetto Terezin.


I had made 9 colored photocopies of pages from the book, including artwork, poems and prose. I pasted the snippets of biographical information known about the creators on the back of each page,  laminated them and spread them around the classroom. 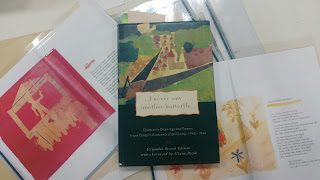 For the next stage of work, I told my students that we were going to choose at least two drawings and two texts, and write:

I gave them about 30 minutes. As they were working, I walked around the room and talked with them. I pointed out the details in the bios, when they were known (some were simply listed as "anonymous") . I made them figure out how old the child was when she was sent to Terezin; and how old she was when she was killed. How old he was when he was released, or how old he would be today. I wanted to help them focus on one or two young souls from the past.

Because focusing on 6 million is inconceivable.

Then I added Step Two:


After learning about 4 pieces, (or as many as they had had time to get to) choose one that speaks to you the most.
If you could send the writer/artist a message, what would it be?

(Anything you wish: a message of empathy, sympathy, encouragement…..you could take a picture and add it…..)

We discussed the difference between the different suggestions, and they wrote. Then I shared a collaborative Google Slides Presentation with them. There were numerous ways they could get to it with their phones:

1. As a Google Classroom assignment*.
2. Type the shortened URL into their phone's browser.
3. Scan a barcode with their phone.
4. For worst case scenario, some of them could fill in the slides on the class computer, or my laptop, which I had also brought as back up.


*Since some of them have difficulties getting into Google Classroom through their phones, I always have back up options


I prepared as many slides as I have students. The slides looked like this:

Each student went into an empty slide, and filled out her or his "Message to the Past".

Here are some excerpts:

"Hello,I'm alive, read your poem.
It's good,it's impressing [sic]. Wish you could survive that, and be here, today and see how you are full of inspir [sic], that you are strong, very strong.
To me the most important thing in life to yourself is to be proud of what you are, who you are, where are you from and what you believe in.
You are impressing me to be that woman that is proud she is a woman, that she is a Jew, and so love and proud to be that one!. If I could I would send you love and strong words that will make you feel good, and make you believe in yourself. You are special, wish that we have more like you."


"Look on the bright side, even if is hard. Find the bright spot, even if it looks impossible. Look and find the similarity to your home. As you will be happier and as you remain strong mentally and physically, it is another step to road a win against the Natzi [sic] scum.

From a free Jewish boy in the future"

"Hello Ruth, I was reading your poem and I became sad. But I want to tell you that the suffering that people express had end [sic], and now all the Jewish people are safe in one Jewish country. I hope you are in a good place in Heaven."

At the end of the lesson, I asked my students for feedback on the activity. For the most part, they said that it was interesting. A few of them said that it made them think about the Holocaust in a way that they never had before. One said he it caused him to think about it through the eyes of a child. One student found it very difficult (but this is the type of student, who, while very intelligent, his comfort zone lies in numbers, hard facts and "one right answer". When called upon to rev up his imagination, I find him simmering at his desk in obvious discomfort.) But he did pretty well in the end. This is what that kid wrote:

"Dear Joseph, I am sorry that you lived like that and you saw bad things in your life I want to tell that now Jews have a country and a army [sic].

Hope that makes you feel happy "

I could have incorporated more technology in the lesson - but I liked the part where the students had to physically walk around the classroom, choose a laminated page, turn it over to read the bio... the kinesthetic is so important for so many students as part of their learning process.
Can you think of a similar way to incorporate technology into a lesson teaching about the Holocaust? If so, please feel free to share in the comments, below!
Digitally yours,
@dele
Post Script:
(Answering my own question ;-) Here is another idea you might consider for using this magical book:
Using Magisto (or any other movie making program) take a poem written by a child from the Holocaust and bring it to life.

Posted by Digitally Yours at 12:17 PM