Just writing a "mini"blog post in response to talk on a program this morning, all excited about Siri - the built-in "digital assistant" on iPhones, now coming in Hebrew. But we've already GOT OK Google! And when one of the show hosts mentioned OK Google and the others hadn't heard of it, I decided that I MUST write about OK Google.


Just say: "OK Google" and say what you need! 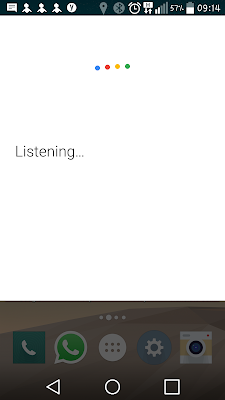 "Show me directions to get to 35 Ben Gruion Ashkelon"

"Where is the nearest supermarket?" 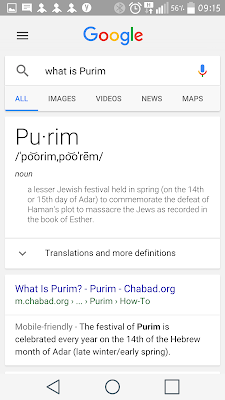 Try it with your students and see how it works for them! Maybe they need to work on their accents a bit to get it understanding them. Now THAT's a good thing! Besides - it understands Hebrew, too!

Go into Google Play and Install Google Now to start playing around with it!

1. "What is the loneliest number?"
2. "How much wood would a woodchuck chuck if a woodchuck could chuck wood?"
3. "Who are you?"


Any ideas for how to use this with your EFL students? SHARE!!!!

Posted by Digitally Yours at 1:08 AM No comments:

GoogleTranslate: Love it or Hate it - You Gotta Help it!

We all know and love (or hate) Google Translate. As a teacher, I have seen more than a few Google-translated compositions that came out as gobbledygook. I constantly warn my students that I can smell a Google-translate composition from a mile away. I also moderate an international group on Facebook that aims at encouraging communication and empathy for others, yet when people with no understanding of  English posted using Google Translate, it turned into mayhem and I had to gently explain the pitfalls of the application. It’s
simply that unless they know English well enough to communicate their ideas clearly, despite their good intentions, discussion process deteriorated into shouting matches.


Here’s just a sample of what can happen to the well-loved Bohemian Rhapsody when Google translate gets its teeth into it.


But Google translate has a really important role in today’s shrinking world, where people move around more than ever before and need to communicate effectively. From the smallest request like finding the nearest public bathroom to an urgent  need to locate the nearest drugstore in a foreign land when you have sprained your ankle and need to buy an ankle support, Google translate is an essential companion.

Google Translate uses algorithms based on statistical analysis. But as we all know, languages are tricky things, and despite the innumerable texts that the mechanism uses to develop the translations, it’s far from perfect. This is the reason why Google is trying to harness the Wisdom of the Crowds (first credited all the way back to Aristotle!) in order to improve its capabilities. And this is why a Google representative asked me if I could think of a way to get our students involved, to improve Google Translate for Hebrew.


At first I thought… nah…. why would my 12th graders, pre-occupied with tests, army call-ups, driving lessons and hormones,  want to do that?


But then I thought… hhhmmmm…... It’s worth a go! It could get them thinking about language AND help others who need to use Hebrew!

In fact, many of them use Morphix, but some use Google Translate…. Unless they were wary of admitting it ;-) . Then I gave them this article, anticipating  their response: “English matriculation exams are coming up, and don’t waste our time on your techno-App-Web2-Googledocs-sites-Twitter bird brained ideas, Adele”.  (FTR - it’s not easy being my student - they are often my guinea pigs, and they know me well enough after almost 3 years). I also prepared accompanying work (one NEVER knows WHAT subject is going to pop up on the Bagrut, and if anyone is listening out there, I would REALLY appreciate it if you could base module G reading passage or composition on using bots to translate, or something Googley similar).


I do not think they were the least bit suspicious at this point.


After they had all finished reading the article,if not yet all the questions, we started checking their work. I used a small squishy ball to keep them on their toes. I throw it to a person and they translate the next word or answer the next question. (They are always impressed at how well I catch ;-)


And then, when they hit the zone of being fuzzy and comfortable, I hit them with it.


Now, it was the end of the lesson, and they were itching to take a few minutes to look over their notes for their big history test the following hour, so I didn’t push the issue, but DID prepare them for the fact that they were going to be participating in a competition that will help our country (a little patriotism, here) and that there was a “to be continued” segment coming up.

But I CAN tell you that when one of my really strong students finished early I told her that we were going to have a competition, and I was going to let her try it out first. I instructed her to scan the barcode and start playing. She REALLY got into it! (But she is not representative of  my class… nor any class, probably.)


The “to be continued” part will happen in class tomorrow.


I intend to have a short discussion with them about the nature of the problems with Google Translate, and to show the first few minutes of Adele’s “Hello” used with Google Translate (I believe they will be more familiar with it than the cool one I used to open this blog).

I want to hear what THEY think about the tool, how it can help them and then to demonstrate how THEY can help others, those who need to use Hebrew, or Hebrew speakers who need the English.Really - a little patriotism can go a long way in the 12th grade in my school ;-)


They will be told, in tomorrow’s lesson, that a portion of all the upcoming lessons until our Passover break will be devoted to spending 5 minutes to help the world communicate with us. They’ll be asked to go into the site and either translate or validate. At the end of the session, they will need to take a screenshot and send it to me in our class What’s App. There will be prizes for the top 3 scorers, and they will not be limited to class time to accrue  badges!


So...what do you think? Will it catch on? Will it flop? Will I be stuck with all of the prizes?


Do YOU have any ideas for how to get kids turned on to thinking about language and translations AND helping others in the community at the same time? I would LOVE to hear about them!

Posted by Digitally Yours at 5:17 AM No comments: