Starting the year off right! Getting to know your students.


It's August 31st, the day before school starts.

This will be my 36th year in the classroom, and you know what? I STILL get excited (and nervous) before a new school year. I STILL spend hours and hours getting myself ready for my classes. (And as I keep saying: the year I do NOT get nervous and excited is the year I step away from the classroom!)

I have these..... "Getting Ready Ceremonies".

One of them is preparing a yearly plan, with a line for each week. (When I first started teaching, I would do it meticulously on lined paper. Then I moved it over to WORD. Today I do it in Googledocs! (Which is why I can share it here!) You can make a copy and use it if you feel it will help you!

Another "Ceremony" is getting to know my students. I need all sorts of information from them.

I want to know how THEY write their names in English.

I want to know their mobile phone numbers (to build a WhatsApp group.... I am considering using a broadcast group this  year instead of a regular group... any thoughts on that?)


I always use an email group (even though I am considering using Google Classroom this year... but I still haven't decided about that finally).


I also want to know what learning styles work for them.


I have not yet decided for sure which literature to teach, and I would like to know what genres interest them. Not that they will decide, but again - I want to know my audience.


Finally, since I am getting a new class of 11th graders, I want to know if there is anything THEY think I should know about them.

Of course, we will be doing an icebreaker activity, to get to know each other, but that's not enough. (Sharing that here, too - it's based on an activity from Jennifer Gonzales' "Icebreakers that Rock".) I want this information to come to me, individually. Which is why I make a Googleform to gather all of the information that I want. I embed it in my class website, and post a QR Code below it so kids will be able to scan it and respond in the lesson, on their smartphones. 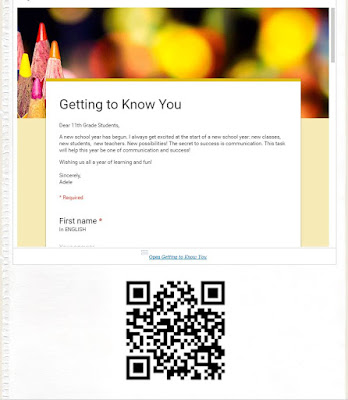 What do YOU do to get YOUR new school year started?


Have a GREAT school year everyone!!!!

Posted by Digitally Yours at 12:43 PM No comments:

Email ThisBlogThis!Share to TwitterShare to FacebookShare to Pinterest
Labels: Back to School, Getting to know you, Googleform

BLOG FLASH! Adding a Googledoc to more than one folder

It's summer and I have been ultra-busy doing stuff ASIDE from Digital Pedagogy and English teaching (who knew?! I actually DO have a life!!! ;-)

I am now busy gearing up for the new school year, in which I plan to get into GOOGLE CLASSROOM! I will keep you updated about that, but while I was doing OTHER stuff, (hint: it's connected to next  year's Google Translate Community Competition... will uncover that when it's ready) I came across something that is REALLY handy.

So I thought: I'll incorporate a series of short and sweet "Blog Flashes" for when I learn something useful. A "Blog Flash" will not be a regular blog post (which I usually spend quite a bit of time composing and investigating) rather I'll just shoot it off - then can share on Facebook, Google +, Twitter, and it's here for safekeeping!

So here is my first discovery!

I gave a talk at the summer ETAI in Ashkelon about the Google Translate Community Competition. I wrote it up in Googledocs and it was in my Drive in a folder for "ETAI 2016". But I need that data again now, as I prepare for the coming year, and want to be able to access it easily when working on this year's competition. However I ALSO want to leave it in the "ETAI 2016" folder in my Drive.

I considered just making a copy - but then, any changes I make on one, will not show up in the other. So I Googled my query :-)  and to my joy, found the solution I was looking for, on a site with tech guides called: "Digital Inspiration"!


How to Add a File to Multiple Folders in Google Drive


Here’s how you can place existing files or folders inside different multiple folders on Google Drive without making copies of the file.

Open the Google Drive website in your desktop’s web browser and select one or more files or folders. You can use the Control key on Windows ..... to select non-consecutive files and folders. Now press Shift + Z and you’ll see an “Add to Folder” pop-up....... Next select the folder where you wish to add the selected files and click OK.

That’s it. You have neither copied nor moved the files to the destination folder, you’ve merely created references or aliases to files inside the other folder. You can use the Shift+Z keyboard shortcut again to add the selected files to any other folders in your Google Drive.

To read the rest of that site, click here.
I hope you are all as excited about the new school year as I am! (36 years in the classroom and still excited, mostly thanks to the digital age which opened a whole new world for me! Woohoo!!!)
Digitally yours,
@dele

Posted by Digitally Yours at 1:30 AM No comments: