United we Sit: Embarking on a journey of cross-lingual teacher collaboration

After months of dreaming, planning, talking, thinking, wishing and hoping: it finally happened! The Start up Event for a new GEG IL (Google Educators Group of Israel) for Teachers of Languages. The kick off was in Google Tel Aviv, but the continuation will be regional. (Because what isn’t accessible, isn’t sustainable). 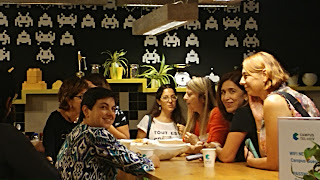 I am an English teacher. I am also a kibbutznik. Both of these roles afford me inspiring opportunities to work together with others, to build something that is bigger than me, letting me rediscover daily that : “The strength of the team is each individual member. The strength of each member is the team.” (Phil Jackson)

While psyching myself up to write this blog post, I went hunting for definitions and quotes about collaboration. I especially liked the third definition given by my Ole’ Faithful Merriam-Webster online dictionary: 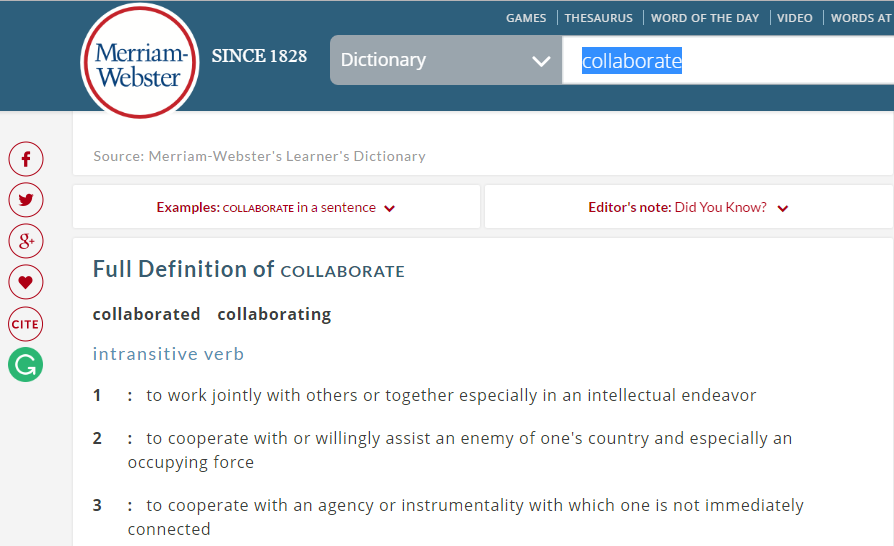 Because that is basically the essence of what we are trying to do in our spanking new GEG IL (Google Educator Groups of Israel). “...to cooperate with an agency or instrumentality with which one is not immediately connected.” Therein lies the spark, the innovation, the brilliance from which we can all benefit.

English teachers are a great bunch of professionals when it comes to collaborating. We have ETAI and ETNI, as well as a gazillion facebook pages, and we are probably the largest group of professionals who teach any one language in Israel. Even larger than Hebrew teachers! (I figure this because English is mandatory from 3rd - 12th grades, as well as passing a proficiency test in any institue of higher learning in this country.) Other languages are far less prevalent and have a much smaller critical mass of teachers with whom they can collaborate.

Concepts, skills and tools used for teaching a language often cross the lingual barriers, and so my dream for the past few years has been to encourage teachers of all languages in Israel to share their tools, experiences, insights especially on the digital front! The Internet and digital technology are giving birth to new apps and tools on a daily basis. No one can possibly know them all. There is always so much to learn - so why shouldn’t we learn from and with each other?

Of course the www enables collaboration to all those who wish to reach out to teachers of their own language - experts even - from all over the world. But sometimes nothing beats being in the same room at the same time with the people with whom you are collaborating.

The people at Google recognize this fact, which is why GEGs are popping up all over the world. I had the great privilege to be among the 50 or so educators who participated in the very first Google Teachers Academy in Israel in 2011. I can say in all honesty that it was a life altering experience. Despite the fact that  such GTAs are few, teachers can still experience the magic without attending a rare academy! The GEGs are able to bring Google to the teachers. Independently, we will be able to devise our OWN agendas, seek our own directions, provide for our own needs!

And so, GEG for Teachers of Languages was conceived. (The "teachers of other languages" being the "agency or instrumentality with which one is not immediately connected".) But, essential to its success is its accessibility. GEGs need to take root all over the country. Luckily, I have found some other first followers, who were willing to go out there on a limb and not leave me to be the lone nut prancing around. (If the reference is lost on you, you MUST watch this.) Because “Many ideas grow better when transplanted into another mind than the one where they sprang up.” (Oliver Wendell Holmes)

Together with Leah, Irit, Rania and Hanan and with the encouragement and support of Bar - the head nut GEG IL - we brainstormed, hoped, planned, discussed  and built our way. Joined by approximately 40 teachers of languages (English, Hebrew, Arabic and French) from around the country, who travelled - some for hours- battling the weekend Tel Aviv traffic after a long day at work, we held our gala Start up Event at the Google Campus on Thursday November 10th! (40 more first followers…. I’d say we’re a Movement! :-)

The evening began with a short intro and then we dove directly into “tasters”. We set up four activities at four different tables in the Hackspace of the Google Campus. Leah’s table was all about context. Rania took playdough and, using an animation app, made a movie which was shown to participants before the evening was over! Irit introduced participants to the coolness of Quizlet Live and I shared the addiction of the Google Translate Community Competition with my participants. The participants divided up into the different groups, and after 8 minutes, moved on to the next activity. 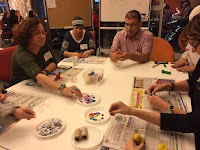 The excitement in the air was palpable, and it was clear that people wanted more. We then moved into the Small Space where teachers were asked to write on  post-its what they wanted from their own communities , and then to respond to others’ ideas.

Each of the regional leaders spoke a few minutes about themselves and the regional group they were dreaming of. Bar (our GEG IL mentor) provided the bigger picture of GEGs in Israel and abroad, and Yael (Education Head of Google Israel)also shared a few words. Rania screened the clip she had made earlier in the evening, with participants of her Creative Flexibility activity!

Time on the 34th floor flew by and in the end, we left excited, invigorated and Googled up to our eyeballs, happy to meet new colleagues from different languages and in anticipation of regional meet ups of teachers of languages with a passion for teaching and digital pedagogy. 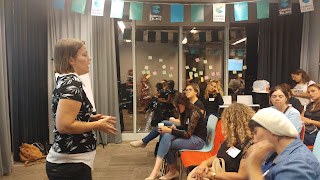 We are finally organizing  teachers of of all and any language in Israel to share, explore, innovate and learn how to harness the power of the digital tools we all have at our fingertips, to further our teaching goals. So please share this with colleagues who teach EFL as well as other languages, join our new FB group, and find (or build!) a GEG IL for Teachers of Languages near you!!!

If you're interested in finding out more about our GEG IL and how YOU can participate (or lead!) please fill in this form. 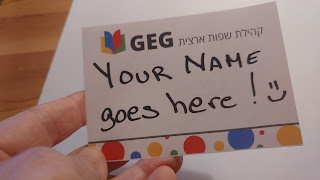 Posted by Digitally Yours at 12:02 PM